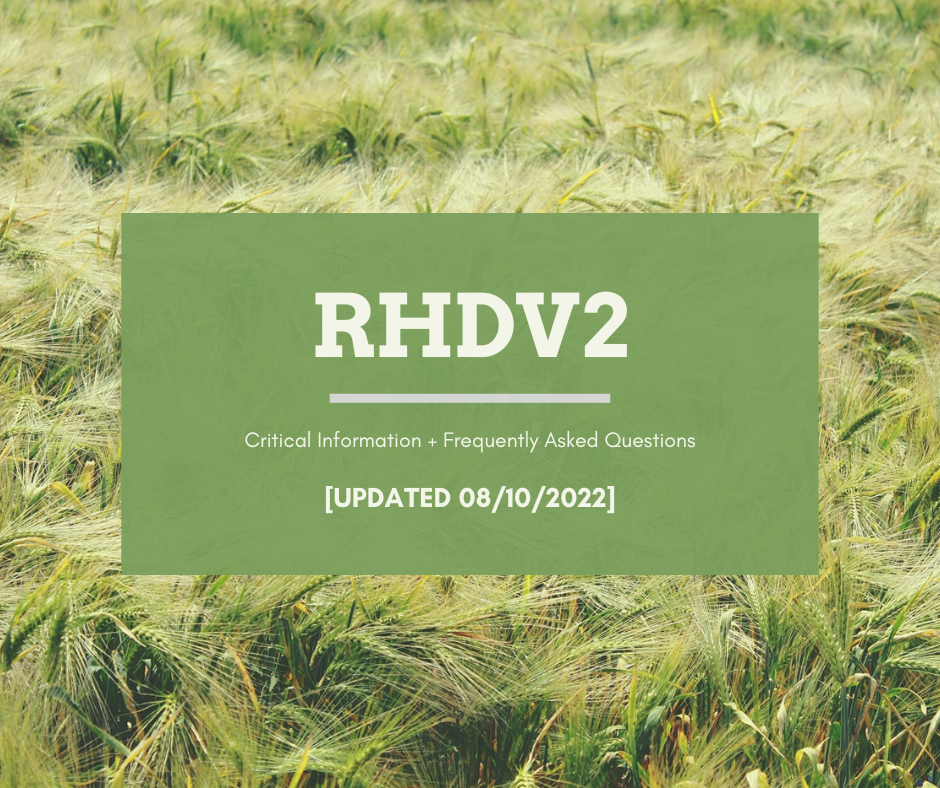 Before we go any farther, we want to let our customers we are keeping a close eye on what is being reported by the California Department of Food & Agriculture (the agency that is monitoring RHDV2 in California) and to date there have been NO reported cases of RHDV2 in the Northern California areas where we source our hay and where our warehouse is located.

As of right now, all Rabbit Hole Hay product currently in the marketplace (whether on our website, Amazon, Chewy, or another third-party seller) is from our Northern California 2021-2022 growing season.

Before we go any farther, we want to let our customers we are keeping a close eye on what is being reported by the California Department of Food & Agriculture (the agency that is monitoring RHDV2 in California) and to date there have been NO reported cases of RHDV2 in the Northern California areas where we source our hay and where our warehouse is located.

As of right now, all Rabbit Hole Hay product currently in the marketplace (whether on our website, Amazon, Chewy, or another third-party seller) is from our Northern California 2021-2022 growing season.

As you will discover in the article below, the USDA estimates the virus can remain stable for up to 3 months.  Considering the dates of the recently confirmed cases and dates of harvest, along with the location of the harvest, we can safely reassure you that no Rabbit Hole Hay product that is available is currently at risk for being a carrier of RHDV2.

At Rabbit Hole Hay, we are monitoring RHDV2 closely and want to provide you both assurance that our product is safe for your rabbits, as well as provide answers to some of your questions. Additionally, you will find links throughout this article that will give you great resources to learn more about RHDV2 and how you can protect your small pet.

Rabbit Hemorrhagic Disease (RHDV) is a highly contagious and fatal disease that is caused by a calicivirus and, as the name suggests, affects rabbits. Originally RHDV was known as a foreign animal disease found in wild European rabbits.

RHDV was first seen in 1984 in China and since then there has been confirmed cases in 40 other countries. RHDV2, the second strain, started in 2010 in France and quickly spread through Europe along with the Mediterranean, replacing the original strain in many countries.

House Rabbit Society states that RHDV causes necrotizing hepatitis and may cause necrosis of the spleen. There may be internal or externally visible blood hemorrhage. Death occurs from liver failure or hemorrhage due to an impairment in the blood’s ability to clot.

Prior to 2018 RHDV had never been seen in North American native rabbits or hares, but there have now been confirmed cases in the United States. While there had been isolated cases starting in 2018, in 2020 there was an outbreak which ended up being more widespread (and continues to spread), causing concern for both veterinarians as well as pet owners. This outbreak has seen cases that have ended in death in multiple states across the country. It's important to note that the outbreaks in Ohio, New York City, and Washington/British Columbia are a different from the single genetic isolate found in other states.

"As of August 1, 2022 - RHDV2 was confirmed in wild rabbits in Mono and Inyo Counties in July 2022. It had been confirmed in domestic rabbits in Los Angeles County on June 30, 2022. Other recent detections in domestic rabbits were in Riverside, San Luis Obispo, and Mendocino Counties in June 2022. RHDV2 detections also were made in wild rabbits from Riverside, San Diego, San Luis Obispo, and Stanislaus counties during June 2022."

California has executed a quarantine on rabbits entering the state, forbidding rabbits to enter from any state that has been diagnosed with RHDV in the last 12 months. The only exception is if they have a Certificate of Veterinary Inspection. For more on what the California Department of Food & Agriculture is doing, read their FAQ here.

Below you'll find a map of the counties that have been affected by RHDV2 as of August 10th, 2022. You'll also find that we highlighted the areas where we've already known about the outbreak (cases) along with the most recent outbreaks as of March 2022. We have also highlighted where our hay is grown at the very top of Northern California. We wanted you to be able to see the physical distance between them. 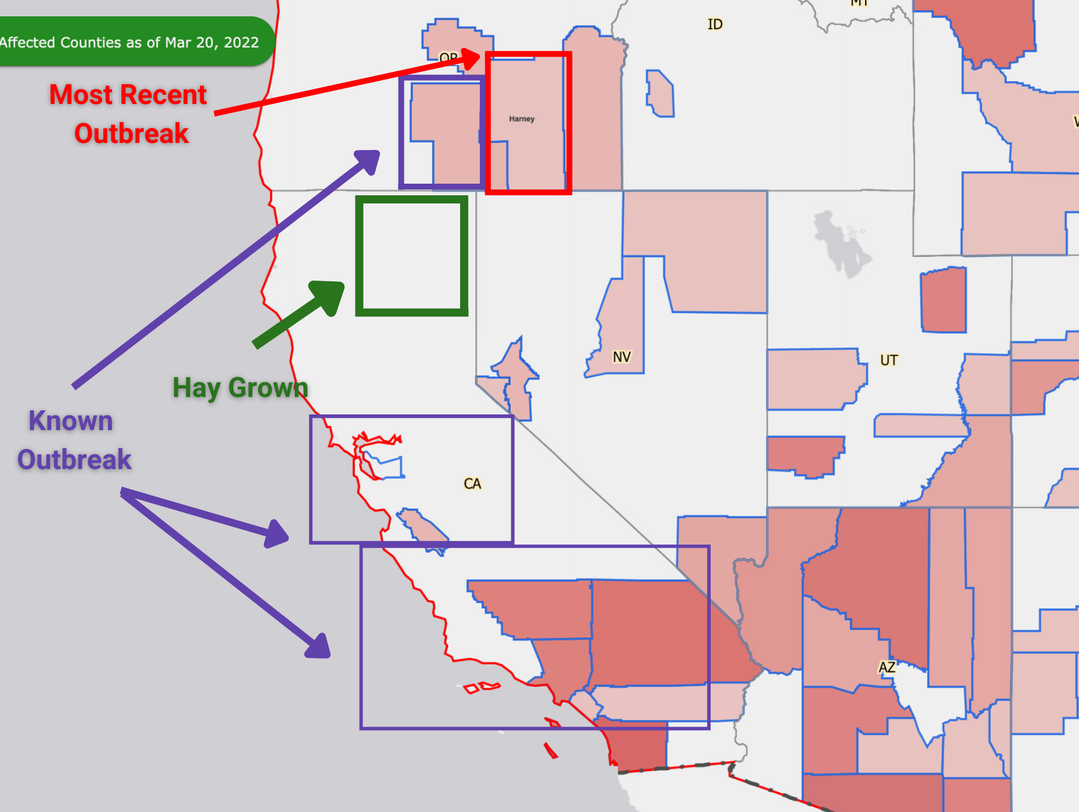 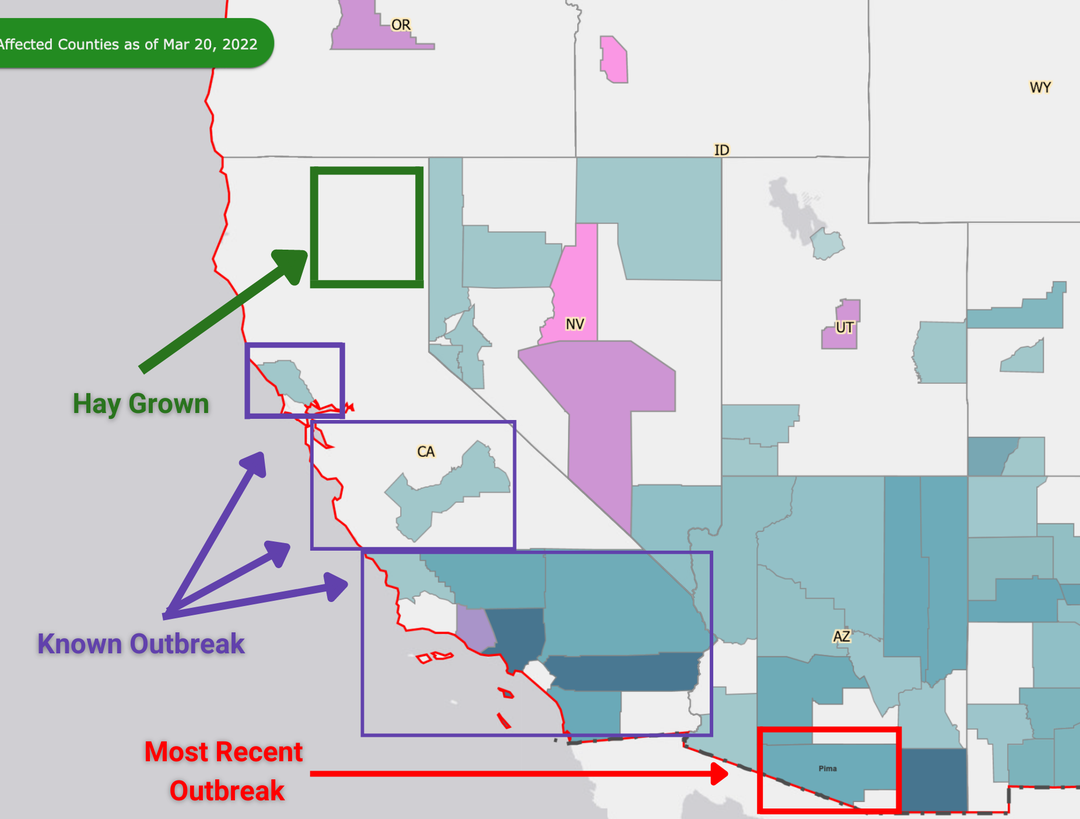 Counties with royal blue outline with no redish color, have been affected but no deaths have been reported.

What is Rabbit Hole Hay Doing to Ensure Your Small Pets Safety?

As mentioned above, the USDA estimates that RHDV2 can remain stable for 3 months. Considering the dates of the recently confirmed cases and dates of harvest, we can safely reassure you that no Rabbit Hole Hay product that is available (whether on our website, Amazon, Chewy, or by third-party seller) is currently at risk for being a carrier of RHDV2.

Our goal here at Rabbit Hole Hay is to continue to monitor the information coming from health officials carefully to ensure we are following any recommended precautions to keep your small pet safe. We are confident at this time based on the latest available information that the transmission of RHDV2 from a packaged product like our Rabbit Hole Hay, is highly unlikely. While RHDV2 could be transmitted in hay, it would require a rare combination of circumstances for the virus to be present and remain stable.

Even knowing that, we are committed to remaining vigilant both in how we monitor and how we move forward with product safety as it relates to RHDV2. We will be paying close attention to all the hay we source in the coming days and months to ensure it is processed in a way that helps us keep your small pets safe.

What’s the Difference Between RHDV1 and RHDV2?

As stated above, RHDV1 has been around since the 1980s but wasn’t identified in the U.S. until the 2000s only infecting wild rabbits. RHDV2 appeared in France in 2010 and was confirmed in North America in 2018. The biggest difference between the two is that RHDV2 has been confirmed to infect both wild AND domesticated rabbits in North America.

Rabbits who are exposed and survive, are carriers and can spread the virus for a minimum of 42 days, if not longer. The California Department of Food & Agriculture has provided this information sheet about RHDV that also contains ways you can help protect your rabbits that you can download and print.

How Does RHDV2 Spread?

The USDA states that the RHDV2 virus is very resistant to extreme temperatures, it can be spread through direct contact or exposure to an infected rabbit’s excretions or blood. The virus can also survive and spread from carcasses, food, water, and any contaminated materials. While it does not impact human health, humans can spread the virus indirectly by carrying it on their clothing and shoes.

What are the Symptoms to Look For?

According to House Rabbit Society, rabbits can contract the virus and not show any symptoms whatsoever. But with those that do show symptoms, they may include:

Sadly, this virus is known as a swift and sudden killer with little to no warning. If your rabbit’s sudden death is suspicious, please report it to your veterinarian as a possible case of RHDV2.

Is there a RHDV2 Vaccine?

Vaccines for RHDV2 are generally available in countries where the disease is regularly found (called endemic).

Previously there was only a RHDV2 vaccine in Europe as it has been regularly found there for a longer period of time. But, as of September 27, 2021 a new U.S. vaccine has received emergency use authorization.

“SACRAMENTO, August 1, 2022 - Medgene Labs (Brookings, SD) received Emergency Use authorization from the United States Department of Agriculture’s Center for Veterinary Biologics (CVB) for their experimental vaccine for prevention of Rabbit Hemorrhagic Disease Virus serotype 2 (RHDV2). The new vaccine is a killed recombinant vaccine which is authorized as a two-dose series, with the second dose given 21 days after the first. Medgene Labs has distributed their vaccine to California licensed veterinarians since October 2021.  Rabbit owners should contact their private veterinarian if they are interested in vaccination for RHD. Veterinarians may contact CDFA at AHBFeedback@cdfa.ca.gov for more information about obtaining RHD vaccine.”

Click here to read the full authorization list along with a detailed list of California counties affected domestic vs wild and the date on which it was discovered.

Read more about the Medgene Labs, the company who is developing the experimental vaccine for the prevention of RHDV2, along with a list of the 46 states that are currently able to distribute the vaccine.

You can also read through the House Rabbit Society's FAQ on the vaccine.

It's important that you consult your veterinarian and discuss if using the vaccine is the right decision for your pet(s).

How Long Can RHDV2 Survive in the Environment?

While the statements on how long it can stay within the environment are mixed, the USDA has stated, “The virus can remain stable for 3 months when dried, but exposed RHDV typically doesn’t persist in excretions on surroundings longer than a few weeks and grows less viable over time.”

Should I Be Worried that the Hay I Purchase Could Give My Rabbit RHDV2?

The risk is very low of your rabbits contracting the RHDV2 from the hay you purchase from a trusted producer.

While RHDV2 can be transmitted via non-living objects (known as fomite) like hay, it would require a combination of unique events to occur for hay to become a carrier. This includes an infected animal traveling through the hay field during a time when specific environmental conditions are in place which supported the stability of the virus.

It is also important to note that when you purchase from a trusted manufacturer, there are quality and safety measures in place that will help mitigate the risk of transmission.

How Can You Protect Your Rabbit?

For statements regarding RHDV vaccinations and biosecurity measures by state. click here.

Looking to join a community of rabbit owners dedicate to watching RHDV2 and see more up-to-date information on a case by case basis? Join the Rabbit Hemorrhagic Disease News Network on Facebook.