The Best Hay, Bedding, and Chew Sticks for Pocket Pets

Pocket pets are tiny household pets that can fit in your shirt pocket, right? Technically, yes. Though over the last few years, the definition of “pocket pet” has broadened to include animals other than just the teeny tiny ones. The category now includes small mammals who are too big to fit into a shirt pocket but are still “pocket” sized compared to other household pets.

What is Considered a Pocket Pet?

In some circles, the term “pocket pet” has replaced “exotic pet” when it comes to searching for veterinarians who have the right skill set to help take care of your small, but extremely important, family member. 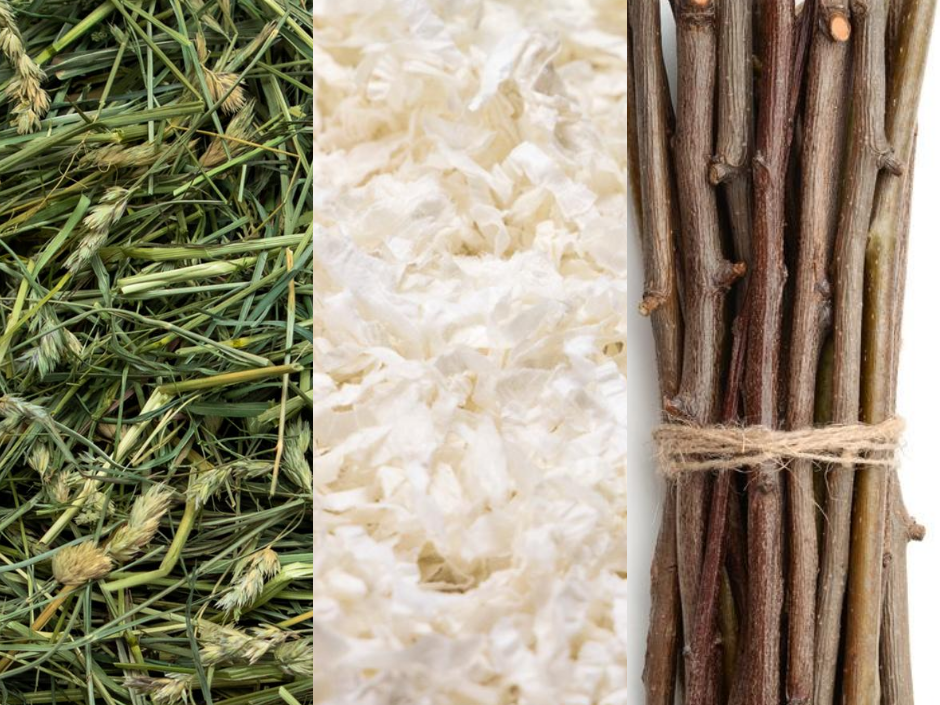 Here is a list of commonly known pocket pets:

Other small mammals that can be placed in the category of pocket pets:

If you're interested in having one of these pocket pets be part of your family, please do your research to see if your state allows you to have them as pets - some of them are illegal to own in certain states.

Many pocket pets will eat Timothy Hay, Orchard Grass, Alfalfa Hay, etc. The important thing to consider is if hay is something that needs to be part of their main diet or can just be can mixed in as a treat among their other food.

The constant foraging and grazing encouraged by hay helps to keep them physically active and mentally stimulated. It also helps to wear down their teeth while the long strand fiber helps to keep their digestion regular and functioning properly.

Hay is also a primary source of food for degus. A lot like guinea pigs, a degu’s diet should be made up of 80% hay to keep their digestion functioning properly and the chewing helps to wear down their teeth. Timothy Hay and Meadow Hay are good options for feeding your degu, but unlike guinea pigs, the best hay is brownish in color and has a sweet smell. Green hay will lead to bloating in degus (which is unhealthy). You can also give them Alfalfa Hay, but because of the high protein in Alfalfa it should only be given occasionally. Since degus won’t survive on hay alone, you can learn more about a degus diet here.

Hay is an essential part of a prairie dog’s diet. Since they require a high fiber diet, Timothy Hay and other grass hays, like Orchard Grass, are best. Do not give them Alfalfa Hay unless for protein (read more about the appropriate Alfalfa amounts under the “protein” section).

Prairie Dogs can have an unlimited amount of grass hay.  It’s recommended that grass hay be 98% of their diet leaving the last 2% for treats. Grass hay will also help to wear their teeth down naturally. It’s important to note that prairie dogs are selective herbivores, consuming only the nutritional part of a strand of grass hay leaving sums of hay to be left uneaten. The uneaten hay will need to be cleaned out regularly. For more information about a prairie dog’s nutrition, click here.

While gerbils do not require hay in their diet, you can give Timothy Hay or Alfalfa Hay as a treat. You can give gerbils a small handful of Timothy Hay on occasion to benefit their digestive system. It can also be something fun for them to build with and play in. For more details on a gerbil’s proper diet, click here.

All of the pocket pets listed above can use bedding as a cozy place to nap as well as a place to do their business. When it comes to bedding, it’s important to stay away from cedar and pine-wood chips as the smell can be toxic to your pocket pet. An inkless paper bedding is usually the best option.

Food Grade Bedding is perfect for pocket pets such as:

You’ll find that our bedding is:

Super Odor Fighting - Odor is a common issue in litter boxes, hutches, and cages. Our Super Absorbent Quick Action Odor Protection means you’ll smell less of whatever was left inside.

Healthy and Safe - We know you worry about your small pet’s health and safety, that’s why we made sure our bedding is Dioxin Free and 100% Environmentally Friendly. Our FDA approved Food Grade Virgin Paper is safe if your small pet ingests it.

Ultra Absorbent - Constantly changing out bedding is annoying, that’s why we focused on maximizing its absorbent capabilities. You can now go longer between changes as it absorbs 6 times its own weight!

99.9% Dust Free - Dusty bedding has become a huge issue, for both you and your small pet. That’s why our super clean bedding contains no sand, dirt, or grit.

Soft and Nestable - We made our bedding as soft and nestable as possible. Life is better for your small pets when potty time is just as comfortable as nap time.

All of these characteristics make our bedding not only the safest option for your pocket pet, but for you too!

Some pocket pets have teeth that are constantly growing and need to be trimmed regularly to remain healthy. You can think of their tiny teeth like fingernails. If they aren’t properly taken care of then they can grow out of control and end up hurting themselves.

All Natural Apple Chew Sticks are an excellent chew toy great for pocket pets to help maintain their dental health while also providing entertainment. Chewing is a natural behavior that keeps them entertained along with combating any stress or anxiety they face. Chewing on ingestible toys, such as Apple Sticks, helps pocket pets wear down their incisors, keeping their teeth trimmed and healthy.

The pocket pets that have constantly growing teeth and can benefit from Apple Sticks are: